Google today launched the first beta version of Android 11 with the final SDK and NDK APIs as well as new features 10. The company has also released improvements to Android Studio (including importing ML models), Kotlin coroutines, Jetpack and Jetpack Compose updates, and an updated Google Play console in beta.

If it looks a lot, it’s because it is. All of this would normally have been presented at the Google I / O Developer Conference, where the first beta version of Android usually starts, but as you know, the event was canceled due to the coronavirus. The company then planned to host the # Android11: the beta launch show instead, but adjourned because of widespread American protests against systemic racism and police brutality.

The global Android developer community has always been a powerful force in shaping the direction of the Android platform; every voice counts for us. We canceled the virtual launch event to allow people to focus on important discussions about racial justice in the United States. Instead, today we are releasing the beta version of Android 11 in a very different form, via short videos and web pages that you can consume at your own pace when the time is right for you. Millions of developers around the world are starting their own business with Android, and we are releasing the beta today to continue supporting these developers with the latest tools. We humbly thank those who are able to offer their comments on this version.

Despite the delays, Google insists that Android 11 is still on schedule (the final is scheduled for the third quarter). You can download Android 11 Beta 1 now via the Android Beta Program, which lets you get the first versions of Android via live updates on select devices. If you have any of the previous previews, Google will also push a live update (OTA). The version includes the final SDK with system images for Pixel 2, Pixel 2 XL, Pixel 3, Pixel 3 XL, Pixel 3a, Pixel 3a XL, Pixel 4 and Pixel 4 XL, as well as the official Android emulator. These eight Pixel phones are a tiny slice of the more than 2.5 billion active Android devices per month – the main reason why developers are impatient to see what’s new on the platform in the first place. While these are the phones on which Google has limited the first four previews from Android 11 developers, the company is working with its OEM partners to bring Beta 1 to more devices in the coming weeks.

Until now, Android 11 was only intended for developers. Now Google is reporting to early adopters and anyone interested in beta can try it out, give feedback, and report bugs.

To facilitate compatibility testing for beta 1 features, Google has decided to make most breakthrough changes for developers until they target Android 11. This way, they will only take effect if you explicitly modify your manifesto. The team also added a new user interface in the development options to allow you to activate most of these changes for testing.

Here are the 10 new features in Beta 1. Google has divided them into three themes: people, controls, and privacy.

Android 11 is supposed to be “more people-oriented and more expressive,” so that “the OS that can recognize and prioritize the most important people in your life.” In other words, expect a lot of messaging features:

Android 11 makes it easy to control your smart devices:

Last year, there were six betas. This year it looks like there will be four developer previews and three betas. Here is the calendar for Android 11:

If you haven’t started testing yet, now is the time. After downloading beta 1, update your Android Studio environment with the SDK (installation guide). Then install your current production application and test the user flows. For a complete overview of new features, see the API overview, API reference, and behavior changes. 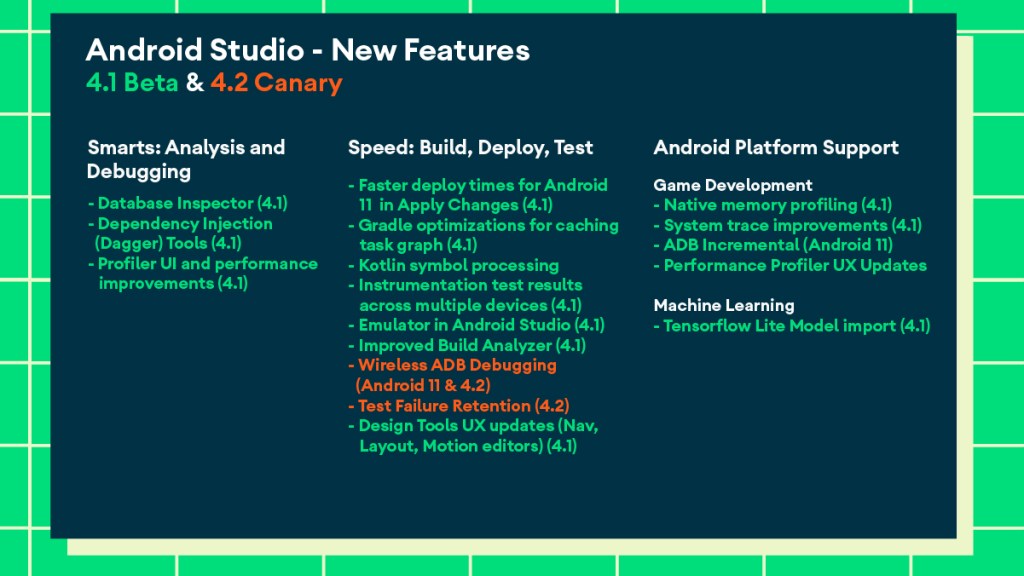 Speaking of the Kotlin programming language, Google announced today that over 70% of the top 1,000 apps on Google Play use Kotlin (up from 60% in December). Jetbrains released Kotlin 1.4 with faster code completion, more powerful type inference enabled by default, function interfaces, a mixture of names and positioning arguments.

Next, Google now officially recommends Kotlin Coroutines, a language feature that makes concurrent calls much easier to write and understand. The company rewrote Paging 3 to be Kotlin-first with full support for coroutines. In short, Android developers can now more easily write and read simultaneous calls. Google has also integrated support for coroutines in three of the most used Jetpack libraries: Lifecycle, WorkManager and Room.

Speaking of Jetpack, a set of components to speed up application development, it has two new libraries: Hilt and App Startup. The first is a developer-friendly wrapper above Dagger for dependency injections, and the second helps application and library developers improve application startup times by optimizing initial libraries.

Jetpack Compose meanwhile, it is now in Developer Preview 2 with new features and new tools to try: interoperability with views, animations, tests, layout of constraints, list of adapters, user interface components material, text and editable text. Google promises that Jetpack Compose will launch in alpha this summer and be released in version 1.0 next year.

The Google Play console is what developers use to manage all of the publishing phases of their apps and games as part of their business. Google redesigned it using Material design, the user interface design system for all Google branded products. The console is now also responsive and supports languages ​​from right to left.

Google says that every page of the Google Play console “has been improved” and that features such as pre-launch reports, Android vital settings, statistics and Play game services are now more usable. In addition, new features allow you to:

Google has not specified when the console will be out of beta, but it welcomes your comments. here.